After one year of not traveling because of the Covid pandemic, nearly forty Pioneers enjoyed a Fall Pilgrimage to historic sites along the National Road in eastern Indiana during a trip that culminated with a Civil War-era dinner at a house once owned by one of the most consequential governors in Hoosier history. The pilgrimage unfolded on a day of glorious weather – Sept. 11 was a sunny Saturday – after being rescheduled twice because of public health concerns during the pandemic.

Traveling on the National Road (which was designated U.S. 40 in the 1920s) from Indianapolis on a motor coach, the Pioneers stopped at sites in Knightstown, Cambridge City and Centerville. The first destination was the Knightstown Academy, which was built as a school in 1875, with additions in subsequent decades. Accompanied by a graduate of the former school, Kevin Richey, serving as the guide, the Pioneers toured the Second Empire-style building, which has been a senior residential community (known as Academy Place) since 2018.

The next destination was right next door: the Hoosier Gym which was built in 1921 as a gymnasium for Knightstown High School. After 1966, when a new high school opened in the town (pop. 2,100), the gym was threatened with demolition. Today, though, it is tourist attraction that draws as many as 80,000 visitors per year. That’s because the gym had a starring role in the classic movie “Hoosiers” (1986), serving as the home court of the fictional Hickory Huskers, inspired by the “Milan Miracle” state championship team of 1954. 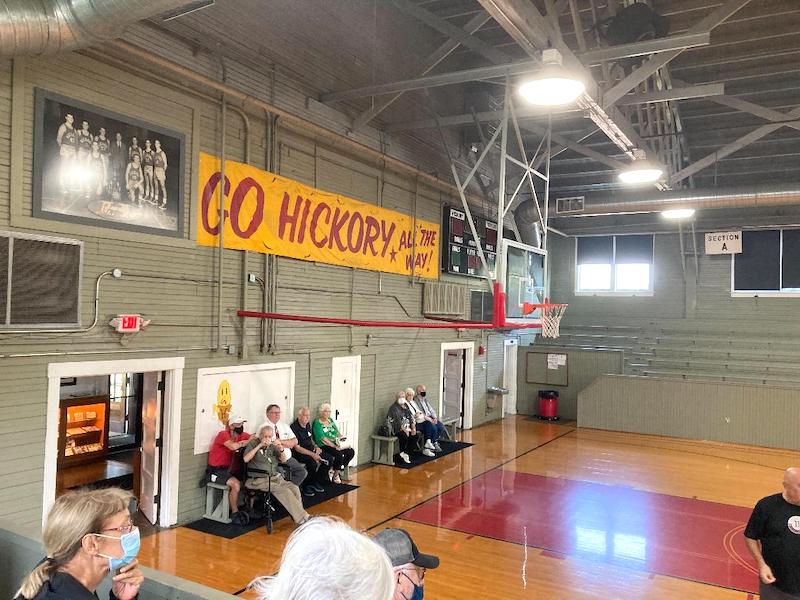 Hoosier Gym in Knightstown, Indiana, seen in the 1986 movie “Hoosiers.”

The Pioneers enjoyed a presentation and tours through the Hoosier Gym – including the locker rooms and other areas seen in the movie – by Knightstown native Bob Grand, who, as a high school senior in 1966, played on the final varsity team to compete at the gym. He has become the author of a motivational book inspired by “Hoosiers” and oversees events at the gym, which now is the setting for everything from weddings to dozens of special basketball games, including the Hoosiers Reunion All-Star Classic, which features Indiana’s top high school players.

The group then traveled to Cambridge City, where the Pioneers savored lunch at the King’s Café restaurant. After that, some Pioneers browsed in Cambridge City’s shops or at a town festival, Canal Days, that was underway. Others enjoyed a walking tour about the Whitewater Canal’s role in the history of the town led by Pioneer vice president Dr. Ronald Morris. Dr. Morris, a history professor at Ball State University, also provided commentary on the motor coach during the day, as did Pioneers pilgrimage chairman Nelson Price. While in the town (pop. 1,750), the group toured the former Cambridge City Opera House, which is on the third floor of a historic structure built in the 1870s. 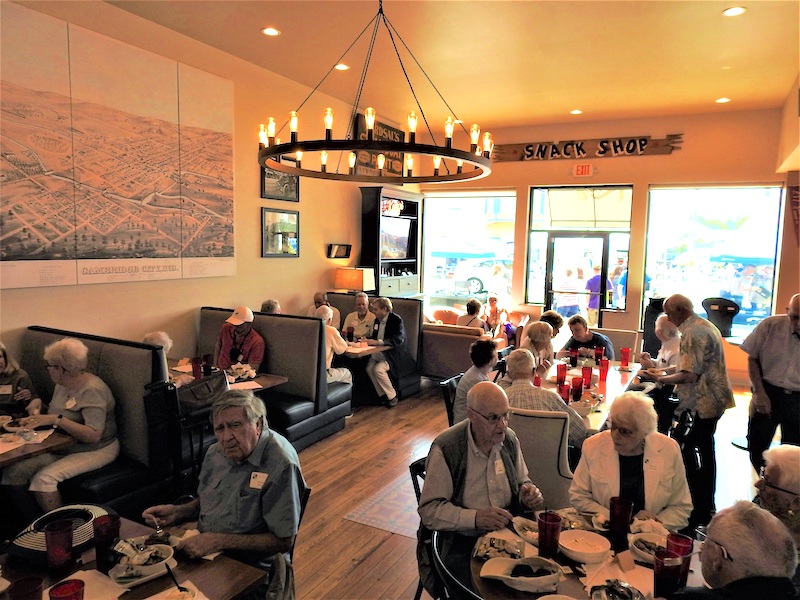 Lunch at the King’s Cafe Restaurant in Cambridge City, Indiana.

Also in Cambridge City, the group enjoyed a private tour of the Overbeck House, the home where four of six sisters designed and created well-known, Arts and Crafts-style pottery beginning in 1911.  The owners of the Overbeck House, Phyllis and Jerry Mattheis, not only took the group through the historic home, which had been built in the 1830s, they also showed the Pioneers the kiln on the property that the Overbeck sisters used.

That was followed by a visit to another historic residence in Cambridge City: The home of Solomon Meredith, a Civil War general who was a commander of the Union Army’s legendary Iron Brigade. The owners of the Solomon Meredith House and property, Troy and Dion Lewis, hosted the Pioneers inside the home (which was built in 1836, with Meredith acquiring it in 1850) and described their renovation projects that are underway.

The final destination was a highlight of the pilgrimage. The Pioneers traveled to Centerville (pop. 2,600) to visit the 19th century house once owned by Governor and Senator Oliver P. Morton (1823-1877). The home, where Morton lived from 1857 to 1862 before serving as governor during the Civil War, now is owned by Dr. Morris, who restored the residence, which is located on the National Road. Morton, an ally of President Abraham Lincoln and an ardent supporter of the Union cause, is regarded as one of the most consequential governors in state history.

At the house, the Pioneers enjoyed a catered, Civil War-era dinner. During the hearty meal, historic re-enactor Kevin Stonerock arrived, costumed as Gov. Morton. In character, he shared details about Gov. Morton’s political, professional and personal lives. During the era that Morton lived in the Centerville house, he was a successful attorney (with an office in the home) and a rising star in the Republican Party.

In addition to the presentation by Mr. Stonerock, Dr. Morris provided tours of the house.  Following the visit, the Pioneers returned to Indianapolis, concluding a memorable Pilgrimage.