By Nelson Price
Photographs by Bob and Jill Clements

In a departure from more than a decade of one- or two-day trips, the Pioneers in 2019 embarked on a four-day (three-night) Pilgrimage. Also in contrast to previous years, which have featured both Spring and Fall Pilgrimages, the special trip from July 25-28 was the only one of the year. The journey was an expedition to see where and how many Pioneers’ ancestors got to the Hoosier frontier by visiting the Cumberland Gap, the pass through the Cumberland Mountains near the junction of Kentucky, Virginia and Tennessee. En route to the gap and during the return trip, forty-seven Pioneers and our guests visited several historic sites in Kentucky.

A highlight of the Pilgrimage was the dedication of a permanent bench in Pine Mountain State Resort Park in honor of ancestors who passed through the Cumberland Gap on their way to becoming Hoosiers. A dedication ceremony on July 25 featured the Pioneers gathered around the commemorative bench, which has a plaque that pays tribute to the ancestors. The bench is in a scenic location near a creek in the state park.

Members of the Society’s Board of Directors on the bench at Pine Mountain State Resort Park. 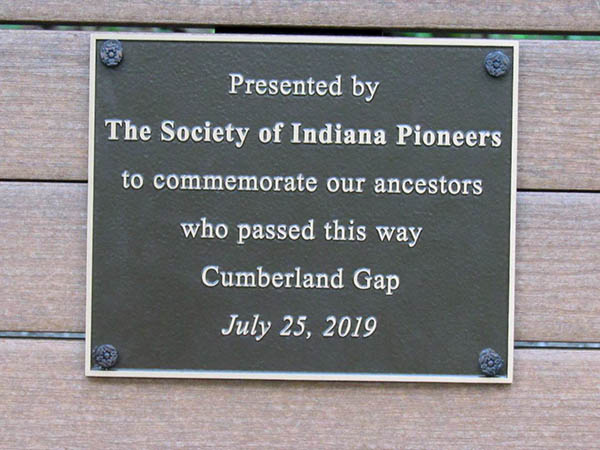 Close-up of the commemorative plaque on the bench.

Before arriving at the Cumberland Mountains, the Pioneers stopped at sites in Frankfort, including two historic houses. The group toured Liberty Hall, one of the first Federal-style mansions in Kentucky (it was built in the 1790s for U.S. Sen. John Brown) and the Orlando Brown House. The Pioneers enjoyed lunch – which included Kentucky cuisine such as burgoo – in the latter home, a Greek Revival-style mansion built for John Brown’s son.

Then the Pioneers traveled to historic Buffalo Trace Distillery, which has a heritage as a bourbon-making operation started in 1786 by two Irish brothers. The Pioneers toured several buildings at the massive distillery, a National Historic Landmark.

After that adventure, the group journeyed to Pine Mountain State Park and registered at its inn prior to the bench dedication ceremony. At the inn, our dinner speaker was a Pine Mountain park ranger; his presentation highlighted the exploits of such Cumberland Gap (and Kentucky) pioneers as Dr. Thomas Walker and the legendary Daniel Boone.

In the morning, the Pioneers traveled with park rangers (clad in historic attire) to see the iconic pass at Cumberland Gap National Park. The group subdivided, with many Pioneers making the two-hour walk on a trail to the gap; other Pioneers road a shuttle to an overlook area where they enjoyed panoramic views. Noting that the Cumberland Gap’s era as the predominant way of reaching the “Western” wilderness lasted from 1775 to 1810, the park rangers estimated that nearly 48 million Americans today have an ancestor who came through the pass. 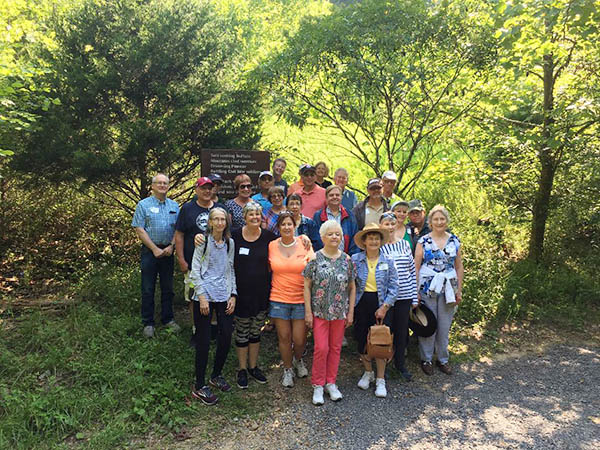 Society members on the trail at Cumberland Gap National Park.

Our expedition to the gap was followed by lunch at Gondolier, an Italian restaurant in Tennessee. Then the Pioneers traveled to Wilderness Road State Park in Virginia. At the park, we toured Martin’s Station, an outdoor living history museum. Native American guides and historic reenactors led the group through replicas of a pioneer fort and a Cherokee village. 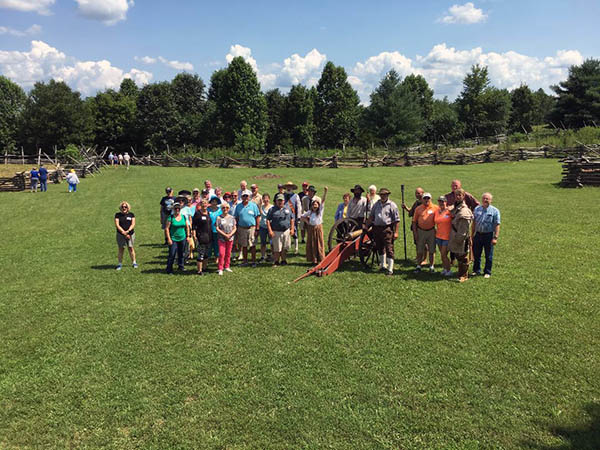 The evening of July 26 was spent at the Berea-Boone Tavern Inn in the quaint town of Berea. At the inn, the Pioneers enjoyed diner in its award-winning restaurant known for locally grown (“Kentucky Proud”) ingredients. 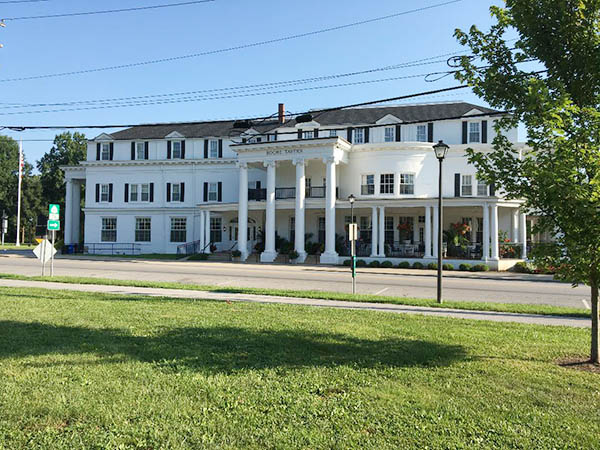 Boone Tavern Inn on the campus of Berea College.

In the morning on July 27, the Pioneers strolled from the inn to the nearby, historic Union Church in Berea. Its minister shared insights about the heritage of the church, the town, and Berea College, which was founded in the 1850s. It became the first college in the South to admit both black and white students; to this day, Berea primarily educates young people from financially challenged families, particularly those in the Appalachia region.

The next destination was a site of medical history: the Dr. Ephraim McDowell House in Danville, Ky. The Pioneers toured the home, where, in 1809, Dr. McDowell performed a surgical experiment, removing a 22-pound abdominal tumor from a woman during an era prior to anesthesia, antibiotics, and modern sterilization techniques.  The surgery, which never previously had been done, was an unexpected success. The patient lived for 32 more years, eventually passing away in Sullivan County Indiana.

The Pioneers then traveled to Shaker Village for guided tours and shopping at the National Historic Landmark site. The group also ate lunch at the village, which has 34 original structures built by the Kentucky Shakers on 3,000 acres. At the peak of its membership in the 19th Century, the Shakers – who believed in a “separate but equal” philosophy for the sexes – had 491 residents in the village.

Ford Harrodsburg, a reconstruction of a pioneer fort, was the next destination. The area also includes the historic cabin where Abraham Lincoln’s parents were married in 1806; it was moved several years ago from its original location 25 miles to the southwest. Tours of the historic sites were followed by dinner at the Beaumont Inn, a widely acclaimed restaurant in Harrodsburg, Ky.

On the final morning of the Pilgrimage, the Pioneers visited the elegant Keeneland Race Track in Lexington. A walking tour of the racetrack was followed by a motor coach tour of spacious horse farms in the surrounding Bluegrass Country.

In Lexington, we enjoyed a walking tour of Gratz Park, a neighborhood of exquisitely preserved, privately occupied houses built in the early 1800s that’s listed on the National Register of Historic Places. Our guide was a Gratz Park homeowner who took us through her house. Other residences in the neighborhood include the home of John Hunt Morgan, the Confederate general who led marauding soldiers, or “raiders”, through southern Indiana during the Civil War. 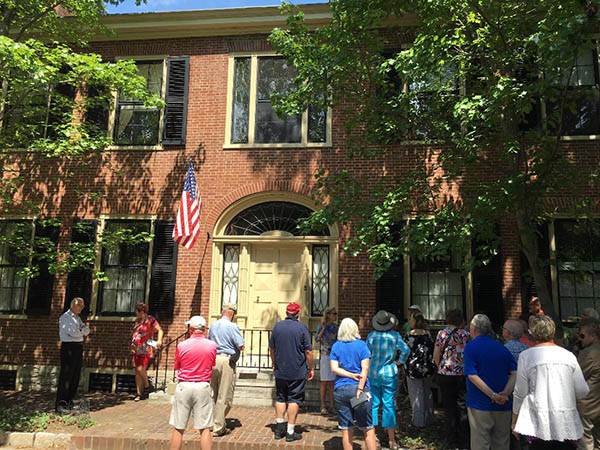 After lunch at Carson’s a restaurant in Lexington, the Pioneers capped off the Pilgrimage by visiting Ashland, the estate of Henry Clay, the Kentucky statesman known as the “Great Compromiser”. The visit included tours inside the mansion, which was rebuilt following a fire after the death in 1852 of Clay, who ran for the U.S. presidency five times.